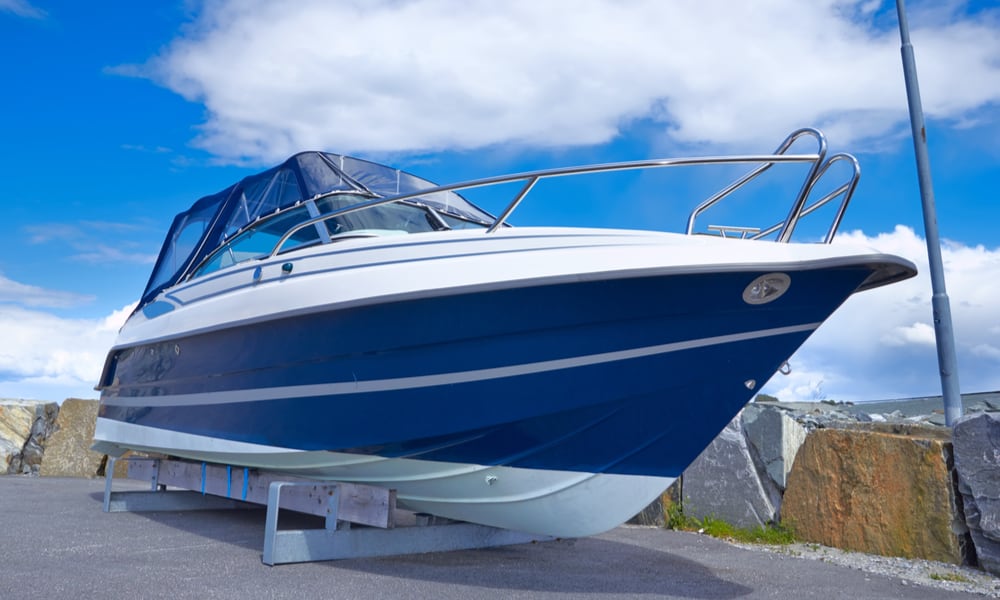 In many ways, the hull is the most important part of the boat because it’s what helps it float, pun intended. It’s the waterproof ‘base’ of the boat, with part of it submerged under the waterline. And these hulls come in lots of different styles and designs. Let’s check out a few.

First off, let’s look at the broad hull divisions. They can be categorized by:

These categories overlap a lot. For example, a v-bottom hull is sometimes described as a (hard) chined hull. And s-bottoms are sometimes labeled as rounded bilge hulls or smooth curve hulls. You can also classify hull types based on the number of hulls under the boat. 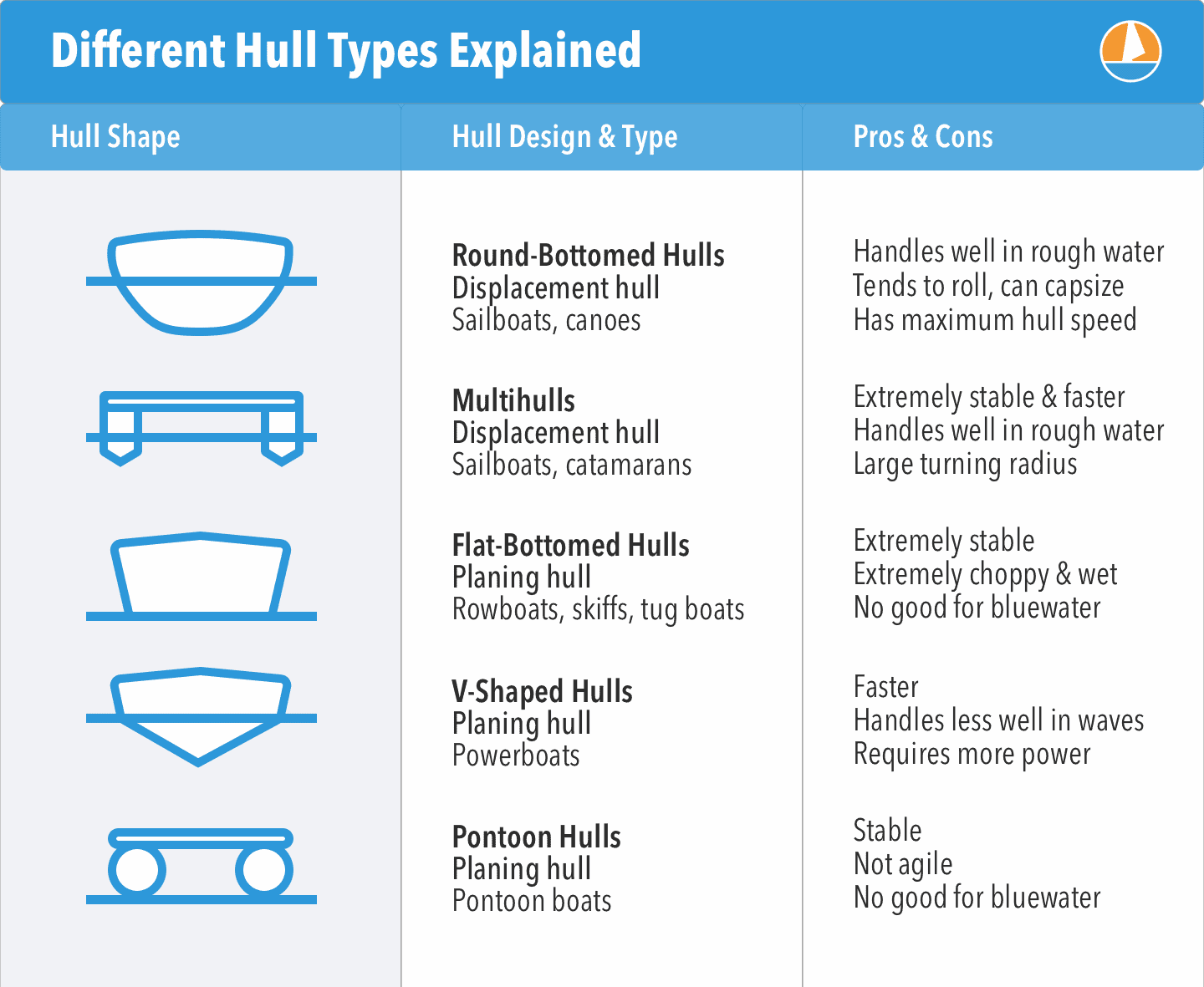 Just to make sure we’ve covered all the boat hull types, we’ve compiled them into a single list that cuts across the categories. This list will expand on any overlaps between the hull classes. Let’s start with the word chine, the angle at the bottom of the hull. It can be flat, curved, etc.

Conversely, planing hulls are streamlined to slice through the water at faster speeds. They ride high above the waves and seem to skim the water. Semi-planing / semi-displacement hulls fall in-between. Let’s look at the specific boat hull types, noting how they intermingle. 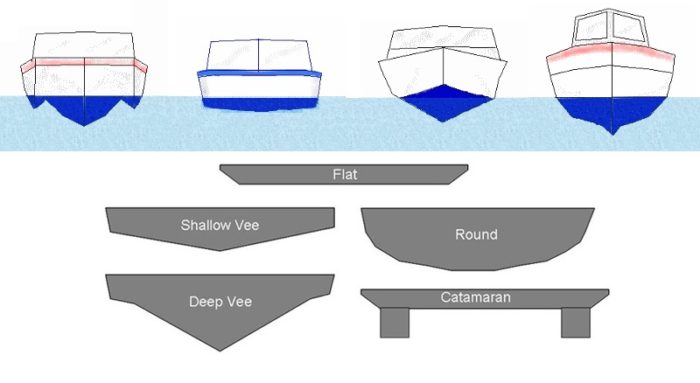 Just to refresh your memory, the chine described the angle at the outer bottom of the boat. This can be flat, slightly curved, fully rounded, or sharp and acute (e.g. a distinct v-shape, which is the harshest angle and is therefore called a hard chine. Flat-bottoms have no angle.

This means they’re sturdy and stable, sitting low and moving slow. That flat surface does drag the boat though, so flat-bottom hulls often have a pointed bow and stern to push the water more effectively. Or they may have an angular front and a reversed bell-shape back.

While flat-bottom boats are often displacers, v-bottom boats are better at planing. That triangular base is where the hard-chine name comes from because it’s a sharp or ‘hard’ angle of 6° to 23°. This hard chine is good at cutting through currents and riding over the waves.

V-bottom hulls are routinely combined with a powerful motor, which makes it even easier to zip above the waves. While sailing, the nose of the boat stays visible above the waterline. These boats aren’t as stable at slow speeds because the rolling waves can topple the boat.

Think of it this way – the V provides a wider surface for strong waves to push against, so the boat has to be fast and powerful enough to counter that roiling motion. A V-bottom hull can have a single V or several smaller ones strategically arranged for maximized boat balance.

Multi-chined hulls can have twin or triplet chines. These chines can be parallel, identical, or have mixed sizes, and are ideal for speed sailing. The acute angles beneath the waterline help the boat soar over the water, while the multiple chines counter the effect of rolling waves.

But because there’s more than one hull, multi-chines are classed as displacement hulls. The hard chines push water into the valleys and ridges formed by the frames. Multi-chine hulls can be cathedral hulls or tunnel hulls, meaning the hull creates an M-shape under the water.

Multi-chine hulls will sometimes have a separate engine for each chine, so they can move quite fast. The platforms between the chines keep the boat stable while the alignment of the chines helps them battle the conflicting directions of circular waves and clashing currents. 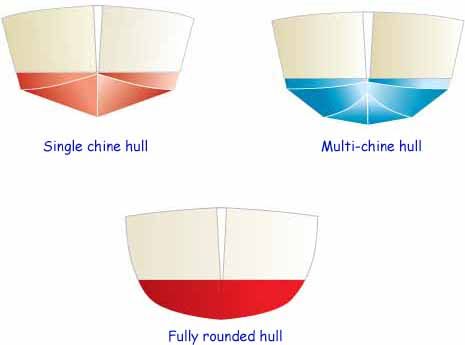 This is the most popular boat hull type because it combines the stability of a flat hull with the maneuverability of a curved one. The rounded bottom of the boat lets it handle waves more effectively than a flat hull. The soft-chine lets the boat glide and bob over larger, faster waves.

The reason molded hulls are so common is their middle-ground status. The curved bottom offers more speed and less drag than flat-bottom hulls. But because rounded bilge hulls are broader than v-bottoms, these boats can handle rougher, deeper waters than flat-bottoms.

Cargo boats, cruise ships, and ferries tend to have rounded hulls, especially if they sail deep waters. They can gain speed but are intended for slow gliding. But they tend to be large so you need plenty of room to turn, and extra care when you’re loading the boat at the docks.

Semi-round bilge hulls are halfway between round hulls and S-hulls. They have a slightly gentler curve than S-bottoms, and they have a pointed keel down their middle. Small boats like dinghies and laser boats often have a semi-round hull, combining stability and speed.

Dinghies are generally used as non-inflatable lifeboats while lasers are for competitive solo sailing. They’re functional boats that can withstand deep, rough waters but are only intended for targeted spurts – like escaping a sinking ship or sprint sailing. They’re not distance boats.

You can also use semi-round hulls for buoy-sailing, where you race around designated ‘landmarks’ in the water. Semi-bilge boats do well here because they can work with flapping sails, go deeper with less drag, and retain stability during sharp turns and tricky maneuvers. 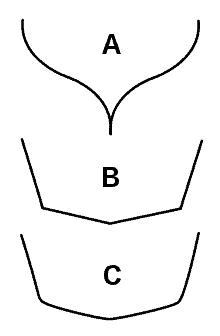 Sometimes called the arc-bottom hull, these boats have a smooth, curved bottom that meets at a pointed keel. The ‘s’ is the bulbous curve that forms from the waterline to the apex, and every boat has two. Think of it like a stereotypical temple dome roof that hangs upside-down.

This arch makes the boat an ideal hybrid. Its bulbous curves offer additional storage space and stability, while the pointy bit is great for planning since it lifts the boat as it slices through the waves. The curves also help to counter the push of rocking waves and currents.

Curiously, DIY boats routinely have that S-shape. These include the kinds of fishing boats that indigenous communities use. The arch creates space for your fishing haul while allowing you to sail swift rivers and deep lakes. Unfortunately, that arched keel is prone to capsizing.

Any boat that moves by pushing water out of the way is defined as a displacement boat. They mostly have flat or round hulls, but they can also have a multi-chine design if the hull has grooves between the chines. This crucial difference distinguishes how the boat operates.

Think of it this way – a V-bottom boat, even one with several chines, needs flatter sections to join the separate hulls. If the platforms are 180, they glide above the waterline with stronger drag. But if those underwater sections are angular, the boat displaces the water down there.

And yes, displacement boats can still zoom along. But when they do, the flatter sections slam onto the water as every wave dips. That makes for a rather uncomfortable ride, which is why displacement hulls are best for boats that intend to carry heavy cargo across calm, slow seas. The opposite boat hull type is the planing hull, built for speed. You know that typical sailing shot where a suave spy seems to be bouncing on the waves in a pointed boat that’s apparently flying through the sea? That’s a planing boat, and the emphasis is on the boat’s lift or plane.

This means the hull is designed to carry more weight at the back, allowing the front to rise out of the water at high speeds. These boats are often equipped with high-powered motors, and if you drive too slowly, the angular hull will have a hard time idling in the water.

In such cases, the boat is likely to pitch. Here’s a shortcut you could use to remember the different boat hull types. Flat, rounded, and multi-hull boats are displacers. Arched, v-hull, and angular boats are planing boats. These features are combined for inflated hollow hulls. 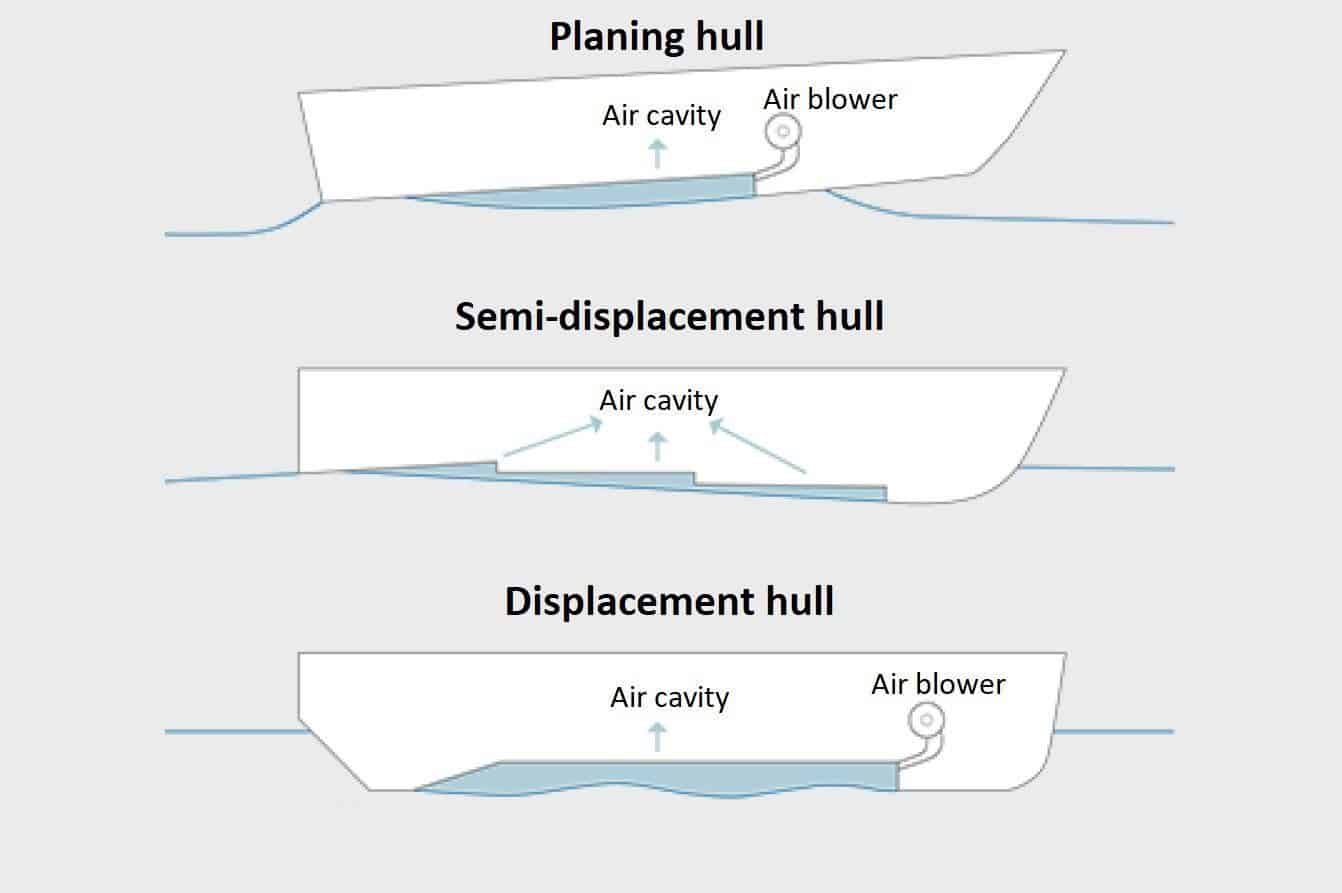 Cruise ships and luxury yachts are the best examples of semi-planing or semi-displacement boats. The design range is quite diverse, so the specs will depend on your particular needs. But the idea is that the hull has a composite surface to facilitate the various sailing features.

For example, you need speed between destinations, and maneuverability as you dock at every port. Massive storage space is essential for the passengers, their gear, and their … by-products. You also want a boat that stays stable as it faces deep-sea currents and creatures.

The draft (that’s the section of the hull that stays submerged) has straight bits, angular bits, and curved bits to allow for all this. Ocean trawlers and container ships can also have a semi-planing hull. These semi boats have Vs and wedges at the front and get rounder at the stern.

What happens when you want a ‘flat’ boat with a larger capacity? Well, aluminum fishing boats are flat-bottomed but tiny. So if you want to carry a larger crew (or even passengers in transit), opt for a pontoon hull. Its hull floats through the use of hollow cylindrical tubes.

These tubes are often made from aluminum, and your pontoon can have two or more tubes below its deck. The focus is on cargo space and balance. Passenger platoons have lots of padded seating space, and guests are carefully spread out to maintain the boat’s equilibrium.

Pontoon hulls are sometimes fitted on trawlers as well. Think of it as an industry-strength inflatable lifeboat, but with a solid, seaworthy frame. The seating area is centralized with raised sides and strategic guardrails. This helps the boat sit lower and safer inside the water. 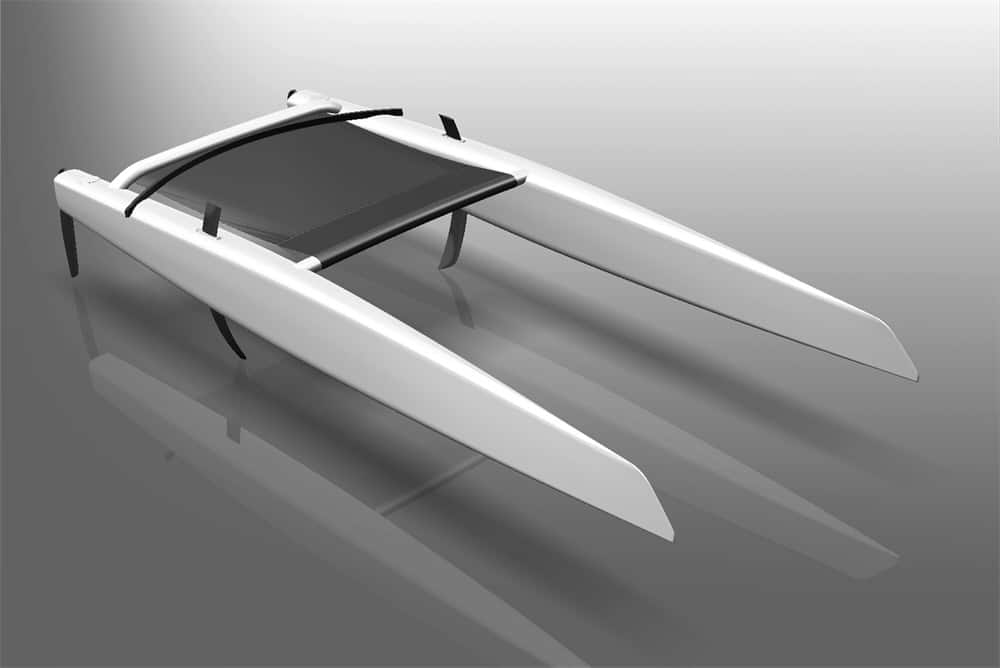 These boats have a massive footprint. But because of the shape and alignment of the hull, they don’t have as much storage space as pontoons. They also have to be carefully designed to ensure stability. This is why catamarans have large masts and sails to balance the boat.

The apparatus also helps you control the boat. Catamarans are preferred by seafarers who prize seamanship. Playing with those swirling ropes and heavy fabrics is both a science and an art, so catamarans are primarily used for competitive analog sailing on rough oceans.

Technically, jet skis or personal watercraft (PWCs) aren’t boats. But they use the same principles and are fitted with a V-bottom planing hull and a pressure jet engine. These jet ski hulls have extra parts to facilitate speed and stability as you ride the waves. They include:

PWCs rely on your balance and confidence. Their hulls are designed for maximum lift, sensational planing, dramatic turns, and extreme speed. The hull angle is sharper at the front than the back. It’s described as a modified V-hull, with all its extra edges and ledges.

With all these boat hull types available, it’s easy to get them mixed up! Here are some hints:

What type of hull do you have on your latest boat? Show us some photos in the comments!