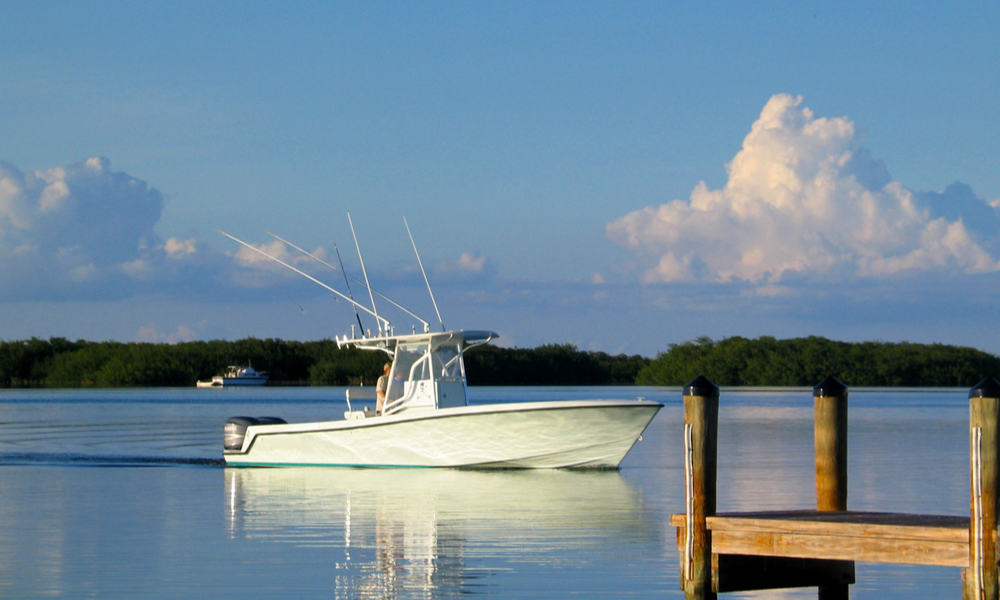 When you’re new to boating, it can seem like everyone is speaking a foreign language. And with the jargon ranging from everyday words to literal Latin terms, it can be tough to figure out the basics! That’s where we come in. We’re going to guide you on the most important boating parts and terminology. Once we’re done, you’ll be chatting on the docks like a pro! 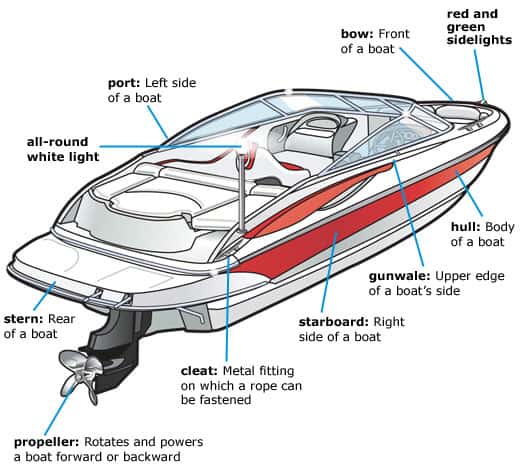 We’ll start with the crucial parts of a boat. Some of these parts can be found in ships too, but we’re staying with the basics. For reference, a boat is smaller than a ship and mostly operates in-shore with oars, propellers, and/or a small motor. To put it simply, a ship can carry a boat, but a boat can’t carry a ship. We’ll look at the typical parts of speed boats and sailboats.

Let’s begin with the directional parts of the boat: up, down, left, right, front, and back.

You can tell which side is port and which side is starboard by looking at the lights. The portlight is red and the starboard light is green. You can also use this information when you’re thinking about right-of-way in boating. Just like traffic, green means go and red means stop.

So the boat that’s on the starboard side (i.e. the boat that’s on your right) always has the right of way. Now let’s name the boat parts from the bottom to the top of the boat. Think of scanning the boat with your eyes, starting at its highest point and working your way down.

Next, we’ll look through the functional parts of a typical boat, whether it has sails or engines.

Okay, now we want to talk about how the boat moves, whether it uses a sail or an engine, sometimes both. Just to be clear, all boats have propellers, but this could be a ski, outboard, inboard, stern, or duo propeller. We’ll go into detail in section two. For now, let’s talk sails.

Sailboats have the same parts as speed boats, but they also have extra parts. These include sail cloths and other functional components that facilitate analog sailing. Let’s check out some of these parts below. We’re going to focus on the most common parts and their roles. 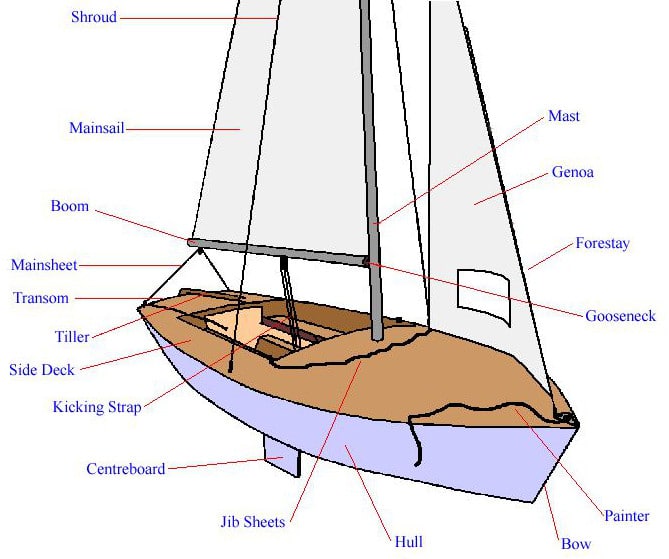 If you’re looking at a sailboat (or a picture of one), you’ll notice lots of rigging. And yes, each rope has a name and a function. But they’re pretty technical, so we won’t get into that. For now, just know that sailboat ropes include a forestay, backstay, kicking strap, and painter.

Now that you’re familiar with the basic parts of a sailboat and speed boat, we’re going to look into the boating terms you’ll hear around the dock. You might hear them at a boat shop too, or in boating forums. Here’s a simple glossary. You’ll never feel out of your depth again!

Newbies sometimes feel boaters are ribbing them by just adding a- to everything. But these words do have meanings. Astern means steering in reverse. Ahead means moving forward. Adrift means loose and uncontrolled. Aground means unintentionally scraping the waterbed. 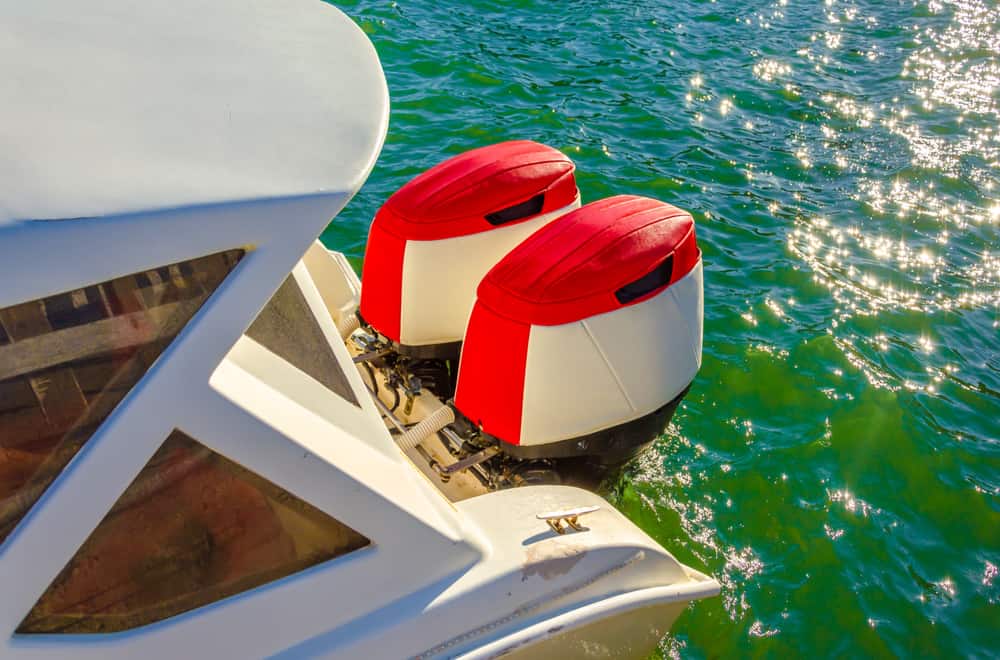 This is when the motor is hidden in a closed compartment. Inboard motors are often modified car engines that are placed in the hull and covered by the deck, with a door or hatch for engine access. You can’t use inboard motors to steel, so they’re connected to propellers.

We’ve mentioned that on some boats, you can use the outboard motor as a steering shaft. But this is only for stern drive engines where the tiller is attached to the rear motor. On ordinary outboards, there’s no steering mechanism connected to the transom engine.

When a boat touches water, the bulk of the boat is above the waves while a smaller section stays submerged. The border between these sections is called the waterline. It’s the visual spot where the boat touches the topmost surface of the water body, leaving the hull below. 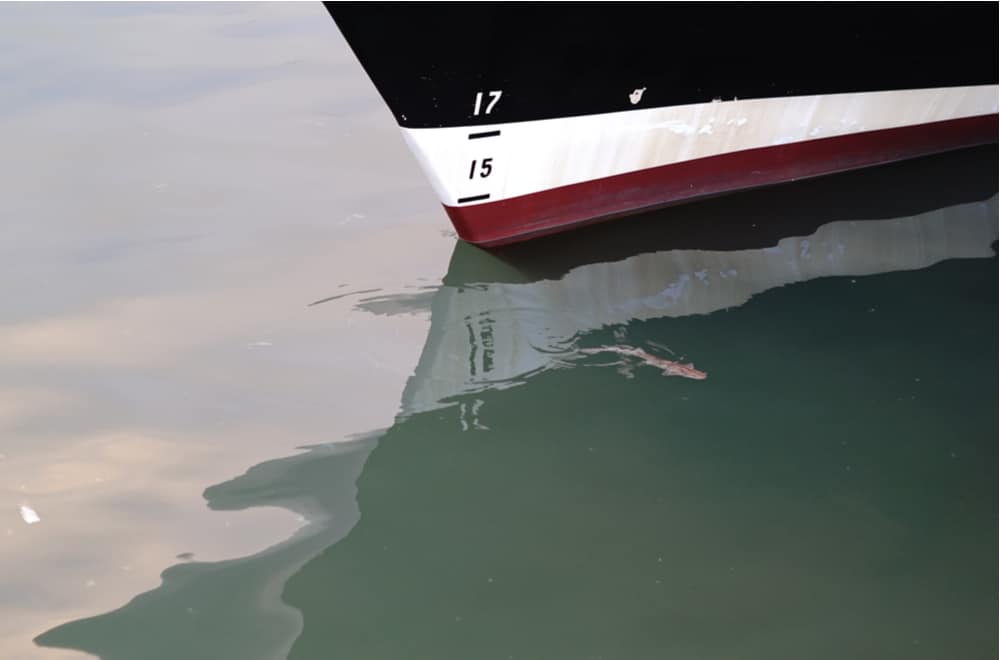 You can physically measure the part of the boat below the waterline. That distance is called the draft, and it describes how low the boat sits in the water, and how much of the boat stays submerged. Shallow draft boats (like pontoons) have 8 to 10 inches underwater at any time.

This term describes the shape and angle of the hull as it moves through the water. It can be defined as flat or round, soft or hard, with lots of overlap between. Round chines have a gentle curve (as opposed to flat hulls). Hard chines have a sharp or drastic angle e.g. V-hull.

This is an area of shallow water where the waterbed (i.e. the ground at the bottom of the sea, ocean, pond, etc.) is roughly a foot below the surface. You’ll find a lot of skinny water inland (lakes, rivers, swamps, etc.) but you can also find skinny waters in bays, docks, or islands.

This is deeper offshore water that’s often rough and full of waves. The currents are stronger so you need a boat that can handle these conditions. Pontoons don’t do as well in choppy water, but they rule the roost in skinny water, so that’s something to be familiar with. 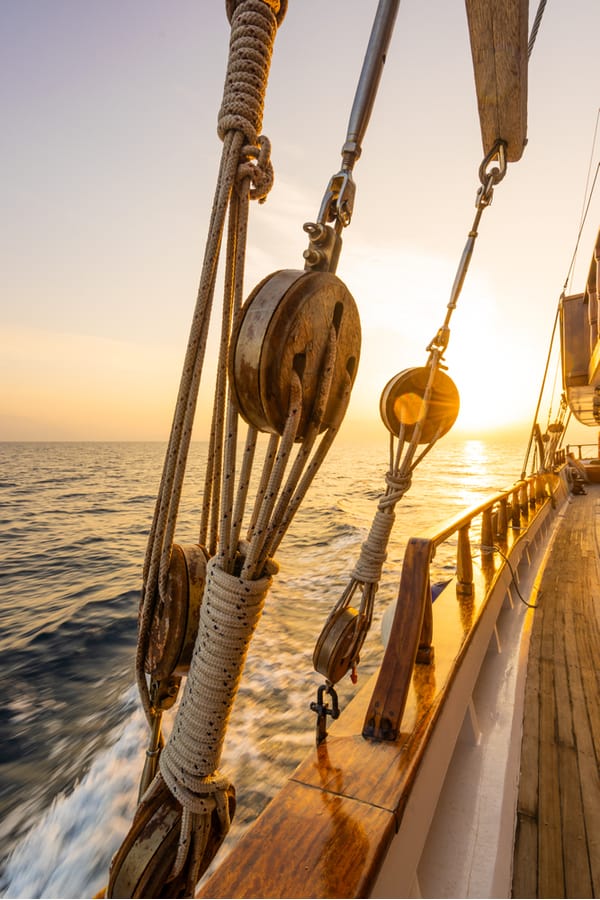 We mentioned this when we were talking about sailboat parts. The rigging is the grab-all term that describes the rope-work on any boat, but particularly a sailboat. If you’re climbing the rope-work to scale the sail, it’s described as ‘going aloft’. You’ll need to know your knots!

When you’re dropping your anchor, it’s isn’t just a matter of releasing it and you’re done. You should calculate how much of the rope or chain you need, depending on the size of your boat, depth of the water, and condition of the waterbed (rocky, sandy, etc.) This figure is the scope.

The mooring is the place where your boat goes to sleep. This could be a pier, a dock, a boatyard, or even the backyard docks on waterfront properties. Sometimes, mooring means anchors and lines. But if you use it as a verb, mooring is the process of docking your boat.

When you drop your anchor, it helps to confirm it has a solid hold on the waterbed. Otherwise, the next time you check, your boat is gone! This process of reinforcing the anchor is called setting. Set the anchor by tugging it or by reversing the boat for 45 to 60 seconds.

Waterways don’t have lanes like roads do. So when two boats meet, you have to use the right-of-way guidelines we mentioned earlier (aka Rules of the Road). The boat that has right of way is called the stand-on or stay-on boat, while the other boat is the stand-off or give-way.

No, they’re not the same as regular miles. One nautical mile is 1,852m or 6,076.12 feet. The speed of a boat is measured in nautical miles too. 1 knot is 1.15 mph, though this is often rounded off to 1.2mph. But don’t confuse speed knots with the rigging knots on the ropes.

When your boat is heeling, it means its leaning into the water and looks like it’s about to fall in. Meanwhile, to gybe (sometimes spelled as jibe) is to swing the boom. This changes how the sail cloths respond to each other and catch the wind, so it changes the boat’s direction.

The heading is the direction your boat is sailing (e.g. due north, etc.) The bearing is a way of describing that heading, but you use angles and degrees. If you’re bearing off, you’re turning your boat away from the wind. But if you’re tacking, you’re turning the bow into the wind. 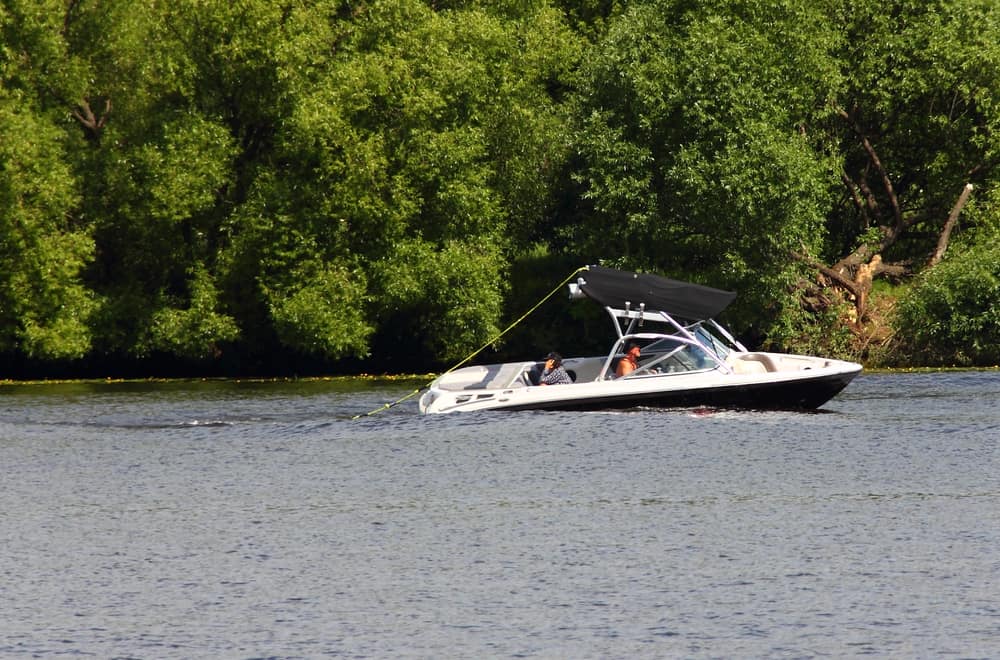 Some boats (like aluminum fishing boats or rowboats) have a flat top. Others have an open-top covered with optional canvas canopies called biminis or dodgers. But if the steering heel is enclosed in a console or bridge, the bridge clearance is the height of the tallest sub-section.

When you’re referring to the rigging, you may hear terms like ‘make fast’ which means to secure the rope by knotting it carefully. Or ‘cast off’ which means to release the docking lines and set off. Also, the ropes on your sail cloths are sometimes described as sheets or lines.

We’ve talked a bit about anchors already, but it helps to know a sea anchor is a boat brake that’s different from a regular anchor. It floats behind the boat to create drag and slow the boat. Pulling your anchor back into the boat is called retrieving or weighing your anchor. 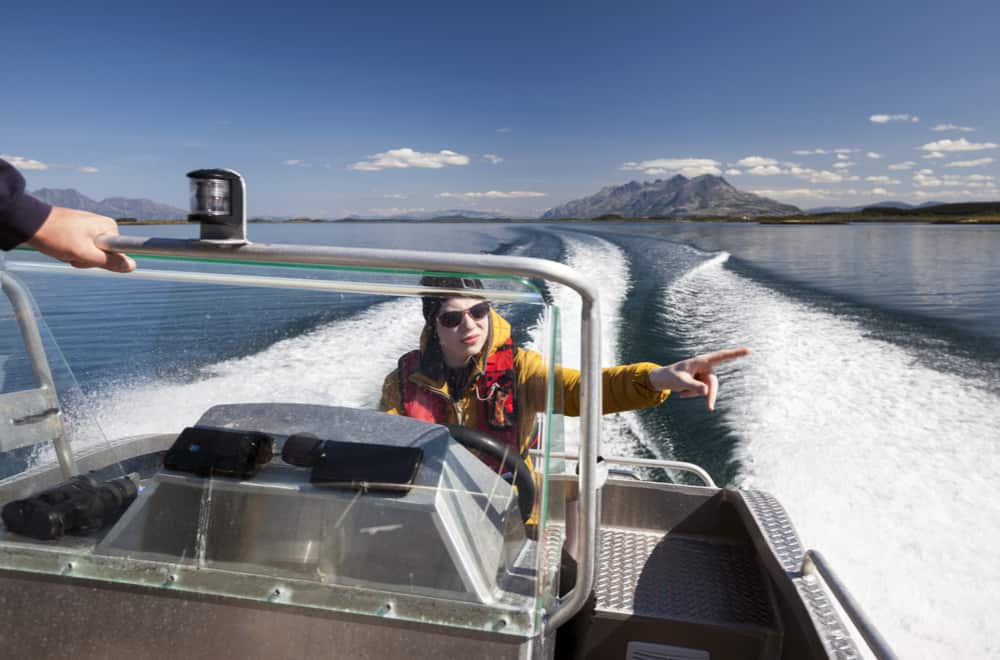 The route you’ve chosen to sail is called your course, so you can be on-course or off-course. If you’re smoothly moving forward then your boat is making headway. The waves that your propeller forms behind your boat are called the wake (hence wake surfing or wakeboarding).

When a boat is sinking, you might throw cargo overboard to make the boat lighter. If you plan to retrieve these items, you can mark them with a buoy. This is called lagan. But if you add weight to the boat to make it more stable (e.g. water, stone, metal), this is called ballast.

As a safety feature, a small lanyard ties the boat driver to the cockpit or steering wheel. If the driver leans too far back, gets distracted, or loses control, the lanyard will tighten and eventually pull away, automatically turning off the engine. Hence the name, Kill Switch. 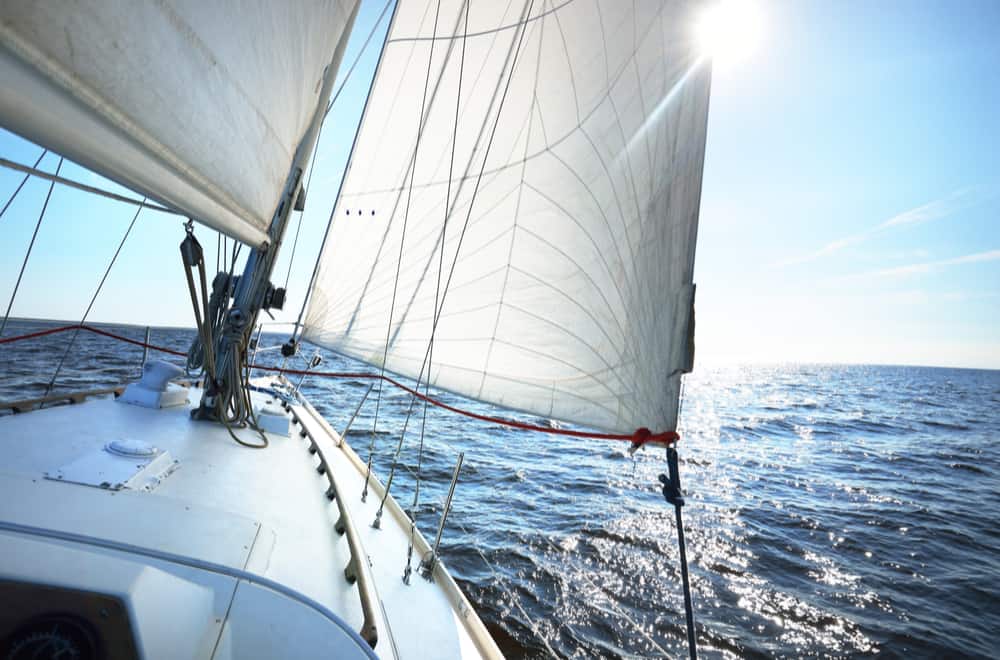 When you jibe the boat (which is the opposite of tacking), you use the boom to maneuver the stern of the boat out of the wind. But sometimes, this happens unintentionally and the boom swerves across the boat aka sailing by the lee. This mess is called accidental gybing.

Do you know any other boating parts or terminology we left out? Tell us in the comments!