Skip to content
As an Amazon Associate Triumph Boats earn from qualifying purchases.

The right motor can make the world of difference to the experience of using your inflatable boat. But how do you know which model to choose?

That’s where we can help! We’ve looked at six of the best motors for an inflatable boat. We’re going to take you through all their key features. And we’ll share the pros and cons you need to know about before you make your choice.

So if you’re ready to find out more, step this way!

Best Motors for Inflatable Boats on the Market 2022 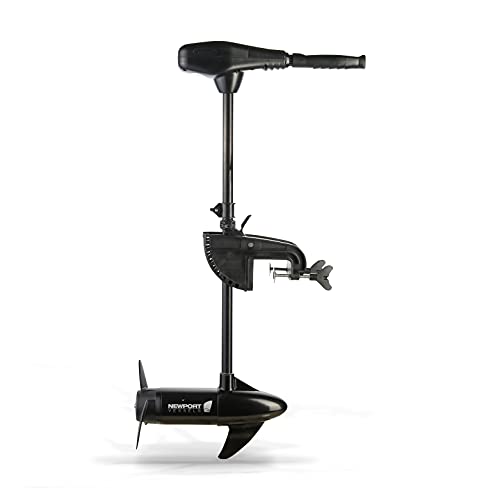 The NV Series from Newport Vessels offers five different motors, ranging from 36 to 86 pounds of thrust.

The weight increases slightly along with the power. The 36-pound thrust model weighs in at 18.6 pounds, while at the top of the range, the 86-pound thrust version is 25 pounds.

For most inflatable boats, the 55-pound thrust model will be a good fit. That will work with vessels up to a maximum of between 12 and 16 feet long. It weighs in at 23.2 pounds and has a shaft 30 inches long. (For the 62-pound and 86-pound models, the shaft length increases to 36 inches.)

It’s an electric motor, so you won’t need to worry about storing flammable liquids. It runs on a 12-volt battery, either lead-acid or lithium deep cycle, which you’ll need to buy separately. The manufacturers recommend choosing at least 50 Ah.

A 5-LED battery gauge will let you keep track of how much power you have left. Also included is a 50 Amp circuit breaker. It’s recommended that you use this at all times to protect the motor from power surges.

There’s a 6-inch telescopic tiller handle. You can adjust the height, mounting angle and direction to your requirements, then lock them in place.

The motor is quiet, so it won’t spook the marine life if you’re planning on going fishing. Indeed, that’s where this model is in its element. It’s designed for trolling – in other words, moving slowly, dragging lines through the water.

It has eight speeds, five forward and three reverse, and a top speed of 4 miles per hour. And it has a three-blade reinforced fiberglass propeller to generate plenty of torque to get things moving.

It’s not the right choice for skimming over the waves James Bond-style. But if you’re looking for a quiet, reliable motor for low speeds, it’s ideal.

The whole assembly is powder coated to resist corrosion. And it can be used in either freshwater or saltwater. 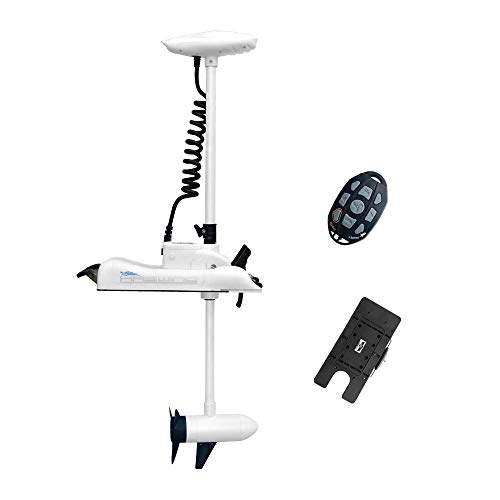 The Aquos Haswing Cayman is available with shafts of 38.4, 48 or 54-inches. And you can choose from either black or white finishes.

It’s another trolling motor, and it’s been engineered to offer precision control and quiet operation. It delivers 55 pounds of thrust and can be used in both freshwater and at sea. A sacrificial anode protects the metal components from corrosion.

It’s suitable for use with boats weighing up to 2,750 pounds, or a maximum of about 18 feet long. The variable speed controls allow you to dial in your required speed exactly. They also enable a longer battery life.

You can check your power levels with a simple display. This shows when your battery is at 100, 50 and 20 per cent. And there’s cruise control, so you can maintain a constant speed as you fish. Note that you might need to correct your direction from time to time.

A long lifting handle makes it comfortable to carry the motor to your vehicle or for storage. There’s also a stow-and-deploy pedal. Just press down with your foot and it will make easy work of transitioning between water and boat.

The propeller has three blades and is 9.3 inches in diameter. It’s made of shock-resistant engineered plastic. You can change the depth easily with an adjustable collar. When you’ve got the correct depth, it will lock in tight.

The motor here is operated by remote control, which can be recharged from a powerbank via a USB cable. The remote control will operate the motor from a distance of up to 164 feet.

Some people find it more cumbersome than a foot pedal, however. And note that the Bluetooth connection means it can take a second or so to react to the button push. 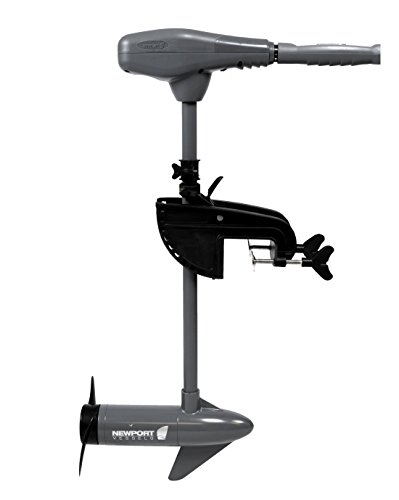 The Kayak Series is the second range from Newport Vessels to make our list. It’s available in a choice of 36 or 55 pounds of thrust. And as you might expect from the name, it’s designed for small vessels – kayaks up to 11 feet long.

The shaft is 24 inches long and it’s made of fiberglass for long lasting performance. The propeller is made of nylon reinforced with fiberglass too.

The motor head is made of aluminum, so it’s strong and light. Everything is powder coated, to help resist corrosion. That means this is a motor that can be used happily in either salt or freshwater environments.

It weighs just 20 pounds, and the 8.9-inch diameter propeller has only two blades. It will give a 7.5 feet long boat a top speed of about 3.5 miles per hour.

It’s designed to run on a 12-volt deep cycle or marine battery, which you’ll need to buy separately. It’s recommended that you choose at least a 50Ah model.

That will run the motor at maximum speed for about 1.5 hours. A battery gauge will let you keep track of its remaining power, with LEDs at 20 per cent intervals.

It comes with 5 foot 6 inch battery cables. That gives you plenty of flexibility over positioning the battery to optimize weight distribution.

The variable speed system offers five forward and three reverse speeds. And there’s a telescopic handle to keep you comfortably in control. An adjustable collar lets you change the depth quickly and easily.

Note that the head with the handle isn’t waterproof. It will cope with light rain, but more of a soaking is likely to cause problems. On the plus side, the head can be spun around to allow the motor to be mounted at the bow if you wish. 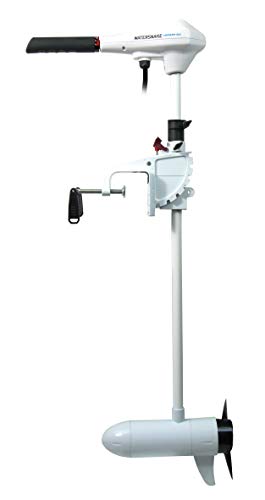 The Venom by Watersnake is another trolling motor that will cope with either fresh or salt water. It’s recommended for use with canoes, sport or standard fishing boats.

There are three motors in the series.

The shaft is made of a zinc anode composite, which makes it very tough. The propeller shaft is stainless steel, and the three blades are specially shaped to repel weeds.

There’s an alloy transom bracket which allows the head to be tilted to your required angle. There’s an adjustable collar to change the height. And a direction lock will keep things steady. The telescopic tiller handle allows for comfortable operation too.

All the motors in the series run on 12-volt batteries and offer eight speeds – five forward and three reverse. These are easily controlled using the throttle on the tiller handle. You’ll get just over an hour and a half of runtime from the battery at continuous top seed.

Note that there’s no circuit breaker here. It’s suggested to use a 50 Amp model to protect the motor from surges.

We have heard of some quality control issues with this one. If you’re in the States, a two-year warranty is available to give you peace of mind. 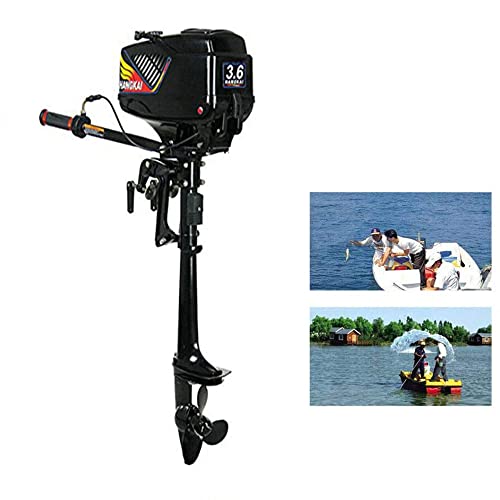 If you’re in the market for a gasoline motor, check out this one from T. B. Vechi. It has a maximum output of 3.6 horsepower and offers 50cc displacement.

The fuel source means this is noisy. A propeller exhaust outlet reduces the noise levels a bit, as well as cutting pollution – but it’s still loud. That means it’s unlikely to be the right choice for trolling. But if you don’t need to sneak up on critters, it offers plenty of power.

It features a water cooling system to keep the engine running smoothly for optimal efficiency. There’s a standard CDI ignition system to get it going. And it’s easy to control too, with a twist grip throttle handle and engine stop button.

The steering can rotate through 360 degrees, allowing you to move into reverse without shifting gear. And it comes with start-in-gear-protection, so there’s no risk of the propeller rotating while the motor is idle.

It’s designed to be mounted vertically, and can be lifted and tilted for use in shallower water. A carbonation system featuring a primer bulb gives excellent efficiency.

The cast nylon plastic construction balances resilience with resistance to corrosion. Sacrificial anodes will help keep everything in good condition for longer too.

You will need to do some preparation before the first use, including adding gear oil. And this will need more maintenance than electric motors too. 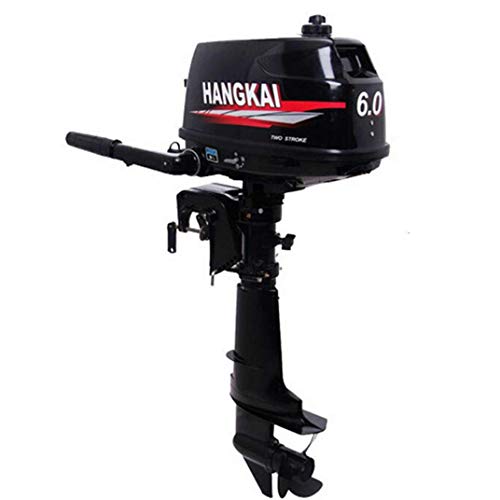 Hangkai’s 6.0 is another outboard motor that runs on gasoline. That means it’s noisier than electric motors and requires more maintenance. And you’ll need to be prepared to store flammable gasoline.

But you will also get great performance. And while the gas tank has a capacity of two thirds of a gallon, you can also connect it up to an external tank for longer runtime.

We’re focusing here on the 6 HP version, but Hangkai motors are also available with outputs of 3.6 and 6.5 HP. As well as inflatable boats, they’ll suit fishing boats, sailboats and even small yachts.

They’re made of marine grade aluminum alloy to resist corrosion. The propeller is aluminum too, and it’s suitable for use in either salt or freshwater.

The choice of material helps to keep the weight manageable. The 6.0 weighs in at just over 41 pounds. Note that the motor will be heavier when filled with gas. But if you want to distribute the weight more evenly, you can use an external tank.

You’ll need to add gear oil to the motor before you use it for the first time. And you’ll need to replace the oil after you’ve run in the motor, which will take about 10 hours.

There are a few other important things to do to get the best from this piece of equipment. But the seller provides detailed information and troubleshooting if you encounter problems.

Ready to Choose a New Motor?

That brings us to the end of our tour of the six best motors for inflatable boats. We hope you’ve enjoyed learning more about what’s out there.

Our top pick is the NV Series from Newport Vessels. We love the variable speed system and peaceful electric operation. And while you won’t hit high speeds, it’s a great choice for a trolling motor.

Whether you choose electric or gasoline, we hope you’re soon enjoying being out on the water.

Triumph Boats is a participant in the Amazon Services LLC Associates Program, As an Amazon Associate, Triumph Boats earn from qualifying purchases by linking to Amazon.com